The Trial of Counting Trials

Posted on April 1, 2020 by Michael Shammas Posted in Uncategorized

“It is clear that the number of jury trials declined in many, perhaps most, jurisdictions … over the last fifty years.”[1] As Professor Marc Galanter writes, this decline reflects a long-term phenomenon with roots beginning in the early twentieth century.[2]

Luckily, the task of counting trials “is clearest for jury trials, but even for those trials, one must decide at what point a trial is to be counted: when voir dire is begun, voir dire is completed, opening statements are made, testimony is started, one side completes the presentation of its case, both sides complete their cases, closing arguments and jury instructions are presented, jury deliberation begins, or a verdict is returned.”[3]

What criteria one is most comfortable using will naturally depend on why one values jury trials in the first place. Is a jury trial valuable because (as legal philosopher Ronald Dworkin writes in Law’s Empire) it helps a citizen accept a judgment as legitimate by circumscribing that judgment within uniform procedures? If so, one is unlikely to count anything but a “complete” trial. Conversely, does a trial begin immediately after the defendant’s monetary security and the plaintiff’s accusation are put to the test? If so, a verdict is obviously unnecessary.

So counting trials would be difficult even with access to accurate data. Unfortunately, data “for state trial rates … [are] far more difficult to obtain and compare” than data for federal trial rates, “largely due to differences between state judicial systems and inconsistent methods of reporting, in contrast to the federal statistical reports.”[4]

In making the attempt anyway, I found that the best data measuring state-by-state differences come from the National Center for State Courts, which in 2004 assembled one of “the most widely used data sets on state court civil trial trends.”[5] Synthesizing numbers from 21 states and the District of Columbia from 1976-2002, the dataset remains immensely useful as a “cornerstone in analyses of civil trial trends” because of “its comprehensive scope.”[6]

As apparent from the following table, the National Center for State Courts shows a consistent and stable decline from 1976 to 2002. This downward trend applies to both bench trials and jury trials. 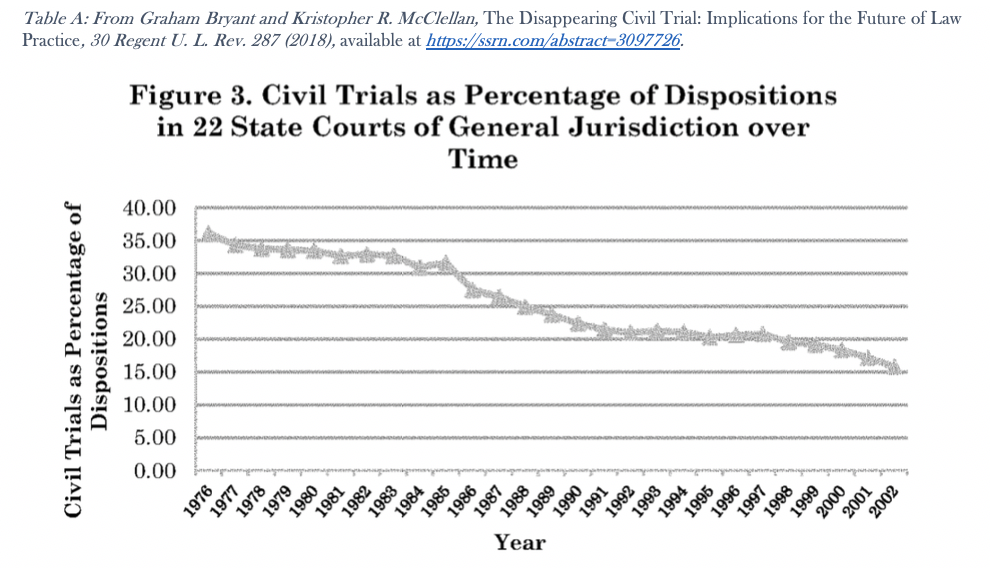 Interestingly, Bryant and McClellan found data from Virginia suggesting the state may be an outlier. As they write, “civil trials actually appear to be on the rise in the Commonwealth.”[7] Because I read the Bryant and McClellan piece after Kritzer’s analysis regarding the trial of counting trials, I wondered whether Virginia is a true outlier or whether methodological dis-uniformity, such as that regarding how states define “trial,” was driving differences in the data.

Unfortunately, it is currently impossible to compare states’ methodologies. For example, my attempt to compare the Virginia dataset versus that used for the 1976-2002 data on 22 states fell short because the raw data on the Virginia Judicial System website does not tell us anything about methodology, including how it defines “trial.”[8]

When I turned away from Westlaw, I found a few other comprehensive datasets that are of use in a state-by-state analysis. These datasets mostly include statistics courtesy of the United States Department of Justice (the Bureau of Justice Statistics). One can also replicate what Bryant and McClellan did for Virginia by logging onto individual state websites. Unfortunately, the relatively dated National Center for State Courts’ raw data remains our best tool, as reflected by a list of sources for data on American trials compiled by Michigan Law Professor Margo Schlanger.

Despite dis-uniformity in the data—and despite trouble separating bench trials from jury trials—two things seem clear: (1) With the exception of possible outliers like Virginia, the majority of state data mirrors federal data in showing a steady decline in the number of civil trials; and (2) any state-by-state analysis will fail unless the same methodology—including a stable definition for words that are as seemingly trivial as “trial”—is adopted for every state.

Absent such a methodology, the ways the data are assembled will simply lack the uniformity required to allow us or other researchers to conduct a state-by-state analysis of the ongoing decline in civil jury trials.

[8] Those interested in viewing the data can find it here.

Michael Elias Shammas is a research fellow with the Civil Jury Project.